‪What is #‎PanamaPapers? Over 2TB of leaked bank communications exposing shell companies and tax avoidance and money laundering by HSBC, UBS, and others. CBC and Toronto Star have the names of the Canadians, but will not be releasing them since they’d face libel suits for doing so without other supporting evidence (and probably even then still).

“When asked why Canada doesn’t have the political will to put an end to the abuse of offshore tax havens, Francis replied: “Because the offshore and taxation lobby is the most powerful in this country.””

Iceland’s Prime Minister may fall over involvement with the crooked Panamanian bank.

When looking this protest in Iceland, remember that Reykjavik is smaller than Regina https://t.co/cc5lZ5yWNc pic.twitter.com/VxC7pMP0bL

I’m so sick of the government reading all of my Facebook status updates, and never liking any of them.
(Seen on a graphic going around Facebook)

SOCMINT
“It had been used, in one case, to arrest ten people who threatened to protest in front of UK Prime Minister David Cameron after organising a meet-up over Twitter.”

Holy, that’s disturbing. Majority Report, anyone? Protesters arrested for planning to protest? Newsflash: Protesting isn’t illegal in a ‘free’ country like England. I guess that rules England out as being free.

“It almost acts like CCTV on the ground for us really,” he said. “When there’s a protest, people go out and record video and we know 2 minutes later they’ll be on YouTube and because people on the internet are very silly they’ll say ‘that’s my mate Joe Bloggs’.”

Police are not supposed to care about free citizens airing grievances against political leadership. It makes the country unfree, if they so much as care to monitor innocent people.

“A lot of newspapers out there report on are we becoming a police state, are the police monitoring everything out there,” [Mr Ertogral] said. “It’s kind of finding the balance and using that information to our advantage, but also staying ethical.”

“There are no checks and balances here, and we’ve got to restore them.” Sensenbrenner, Republican who drafted the Patriot Act II.

Go read 2001/2002 debate over the Patriot Act – NOBODY thought it enabled mass, indiscriminate, bulk collection of all Americans' records.

Sensenbrenner pointed out the government administration can monitor who journalists are in contact with, in order to avoid criticism. They’ve done the same with protesters, such as those participating in Occupy Wall Street.

Obama could have ended the Patriot Act in 2011, or at the very least exposed the illegal spying on all Americans’ electronic communications, but he signed the bill with an autopen instead. There were not 2/3rds of the House and Senate voting in favour of the Act, so he could have vetoed it. He didn’t, and he’ll wear that mistake, because he re-authorized an out-of-control NSA.

“The Senate voted 72-23 for the legislation to renew three terrorism-fighting authorities. The House passed the measure 250-153 on an evening vote.”

He’s been lying about it:
“Obama said that a second program collecting global internet traffic only applies to foreigners. “This does not apply to US citizens and it does not apply to people in the United States,” he said.”

It really can't be overstated that the NSA spying on all Americans is a worst case scenario for civil liberties. #PRISM = Stasi #Obama

If you need to read a Republican’s take on the Patriot Act, here’s McConnell. It’s very hard to stomach, with all the gloating and scaremongering.

It’s difficult to believe this story is a month old, and no one in the US Government has been charged with a crime. Assange is correct in saying the Rule of Law has collapsed in America. END_OF_DOCUMENT_TOKEN_TO_BE_REPLACED

You can see what Americans desire as wealth distribution, vs. what they think the unfair situation is vs. reality. It’s off the charts, literally, how much money the 1% makes in comparison to what sort of uneven system Americans accept they experience.

It really displays the absurdity of even well-off Americans making $100,000/year defending the criminal banks on Wall St.

It’s really bad, because everything is rigged to favour the rich. Useful idiots saying the rich are entitled to rig the system, don’t do themselves any favours.

The States are Too Crooked To Fail; meaning that the super-rich have rigged the system to collapse entirely if they start to lose even some of their obscene wealth.

Canadians first somewhat accepted RCMP officers dousing peaceful protesters (and the media) with pepper spray, back in the 90s, during the OPEC summit in B.C. It’s regressed to the point where Officer Bubble cries about the possibility of getting soap in his eyes, while his even less scrupulous brothers in arms will charge into a crowd while swinging clubs. Officer Pike at UC Davis strolls along a line of seated protesters, and blasts them in the face with orange, burning spray. NYPD kettle women in Summer dresses, and blast them in the face with chemical agents. Oakland PD fire a canister into the head of a protester and attempt to prevent medical assistance. Brazilian armed thugs attack a woman with chemicals, as she stands alone on a public street. Turkish thugs blast a woman in a red dress with chemicals from an assault spray-gun.

Why are we letting our police forces around the world act as corporate military squads, and thugs?

Saša Petricic has been arrested in the midst of covering the Occupy Gezi protest in Istanbul. This is an outrage which the Turkish government will not be able to defend themselves from.

Short hours before his arrest, this was the scene:

Many protestors’ barriers remain around #Taksim. Police cleared only one end of square #OccupyGezi pic.twitter.com/wS3yMJdzkm

Just got off the phone with the Turkish ambassador and expressed concern over reports of a CBC journalist detained in Istanbul.

Clearing out more of the barricades erected by the protestors near #taksim park. #turkey pic.twitter.com/p1gRKpNkoo

RT @CBCAlerts CBC's @sasapetricic and @derekstoffelcbc are being detained by police in Turkey. They have contacted CBC, say they're ok #hw

UPDATE:
They were released many hours later:

Thanks for all the kind wishes after @sasapetricic and I were detained by Turkish police yesterday. In custody for about 11 hours. #turkey 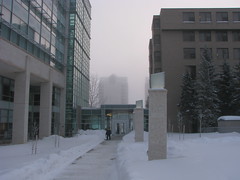 -(UofR image, to keep this blog post from appearing boring.)

“We’re aware of this” said Greenpeace Canada’s executive director Bruce Cox, who met the head of the RCMP last year. “We’re an outspoken voice for non-violence and this was made clear to the RCMP,” Cox said.

He said there was real anger among Canadians about the degradation of the natural environment by oil, gas and other extractive industries and governments working for those industries and not in the public interest. Security forces should see Greenpeace as a “plus”, a non-violent outlet for this anger, he argued. “It is governments and fossil fuel industry who are the extremists, threatening the prosperity of future generations.”

The reason the Conservatives view environmentalists as a threat to national security, is because Harper thinks he is the nation, and his secure grasp on power is threatened by peaceful protests that spread the truth about his support of environmental and economic collapse for the crude gain of his wealthy backers.

In a Canadian Senate committee on national security and defence meeting Monday Feb 11 Richard Fadden, the director of CSIS said they are more worried about domestic terrorism, acknowledging that the vast majority of its spying is done within Canada. Fadden said they are “following a number of cases where we think people might be inclined to acts of terrorism”.

I’m someone who was once under investigation by CSIS, in order to get a job I had a while ago. It was like an advanced CRCheck, except by our national spies instead of local police. I don’t say this in jest, and my family and friends will confirm it if you ask them. I was (obviously) deemed no threat to Canadian national security, because I’m a loyal Canadian, and a peaceful person. I am also an environmentalist. I am not a terrorist. I care deeply about our country and its people. I have no good way to tell if I’m presently under targeted state observation, but assume I am. This does not make me paranoid, it makes me aware of my surroundings and news reports, and does not significantly change how I go about my life.

If CSIS, the RCMP, and the Cons had announced that since they were aware of “a number of cases” where Christians they were monitoring had been threatening violence, they’d since begun monitoring all Christian groups as possible threats to national security, can you imagine the wailing and gnashing of teeth then? How is that different from monitoring all environmental groups because some violent people happen to support protecting natural ecosystems (and apparently not people)?

The Conservatives are literally making you pay for spies and police to monitor grandmothers and children who attend peaceful gatherings, in order to eliminate them as potential threats to Canada. That’s pretty messed up, and it describes what has been going on. Are you going to put stopping it at a lower priority than other things you care about next time you vote?

“Deep law and order background.”
[link added]
Oh, is that what you have when convicted of an election crime? Maybe Martin is referring to Toews deep psychosis, referring to Canadians standing against him as “child pornographers“. Sounds like a perfectly fair judge, eh?

Chaulkupy is getting arrested for free speech. Cities are claiming they have to clean up water soluble chalk. Hello, the rain washes it off?

Authoritarian, baby-sitter impregnaters like Toews are making a world where hopscotch is literally illegal.

Actually, the clowns are in public office. First they make it so police can claim a group that is assembled peacefully is illegal (which is a clear violation of Charter rights). Now Loi 78 and the City of Montreal is going after mask wearers at public gatherings celebrating political events. Au revoir, Bonhomme! I always knew he was a shifty character out to cause mischief.

Will ballgames where a couple fans out of tens of thousands throw something at authorities, be declared illegal assemblies? The other night a fan threw something at an ump. Was tear gas fired back, and the SkyDome crowd told to disperse by police? Yes, that’s an extreme comparison, but you should ask yourself why sports fans have more civil rights than people walking on the street for a better education system.

Holy crap! Rolling Stone tears limbs from the zombie Bank of America. You probably won’t read a more blistering, or researched condemnation of the 1% “Royalty” that literally has the state paying billions for the crimes of a few men it refuses to send to jail. BoA is one big reason why Occupy Wall Street exists, and must succeed in bringing about charges against the criminals who’ve absolutely imperiled the global economy with their greed and incompetence.

It’s an absolute tragedy that the WikiLeaks files on BoA are presumed stolen and lost by DDB who betrayed the journalistic organization to start his own “Open Leaks” website. We can only hope that the original leakers of the destroyed documents, maintained access or a copy of their leaks, and are willing to try again.