After a SaskParty candidate was revealed to be an anti-science Q-cult fascist, so Moe removed him to reduce embarrassment to the party. The replacement is a home builder association CEO.

“The rising cost of housing is more important than solving climate change for most canadians (sic).”

Saskatchewan is a world leader in air pollution per capita, and we don’t need yet another MLA who doesn’t want to do a darn thing. She actually resists changes that could help, if they aren’t driven by “the market”.

“Mandating energy efficiency at accelerated rates will only setback innovation while making housing more expensive. I see the word “mandate” far too often in this report.”

Doesn’t seem like she’s yet a total Sask Party drone though. She has even praised Trudeau in the past.

And has spoken up about anti-women Conservatives too:

The Green Party of Sask is running Jan Norris, and the NDP is running Matt Love.

Half of the kitty cats just walked by to sniff my hand only to keep walking as I started to pet them, so they wouldn’t be mistaken as being too interested in more petting. Charlie just came up to me again, and left when I tried to pet him.

In good news, Hubble found that an exoplanet about 110 light years distant, happens to have watery clouds in the Goldilocks zone. That means if we got as-fast-as-light transportation, it would take only 110 years to find out if there’s life there without radio transmission capabilities.

In less good news, the Canadian election is officially underway. Traditionally my blogging picks up during a campaign, and this one will likely stimulate blog posting every other day or so. My early impression is that the media will make its usual effort to characterize the race as 2-way despite there being multiple parties. This is particularly dangerous this time because a Conservatives are run by a do-nothing who works happily with racists and religious zealots.

Meanwhile, the NDP are taking out their rage from slipping into 4th place in Ontario, and other parts of Canada, out on the Greens. Watch for a whole lot more horrible things said about Elizabeth May. The other day she apparently became a separatist, and I’m certain next NDP headquarters will try to convince people that she’s a flying green people eater.

2 weeks ago Elizabeth May was in Regina at the University and gave the following speech. In it she covered everything from our failed public transportation systems, to SNC-Lavalin’s punishment when they are convicted of corruption for their bribes regarding construction in Libya.

Title in honour of a Beaverton joke.

Andrew Weaver brings up the issue of Kinder Morgan as something he couldn't overlook when negotiating.

I’m excited that this is the first time the Green Party has been directly involved in governing a province anywhere in North America. I expect great things from the NDP/Green coalition, majority government there. Clark should resign soon.

I basically stopped writing about the Saskatchewan election on my blog following the hair pulling, anti-democratic decision by CBC and its consortium of TV broadcasters to block most party leaders from debating with Wall and Broten. So we’ll go another 4 years not knowing how those two shouty leaders behave when there are adults in the room with different political views and preferred methods of governing.

@jayfish82 @JohnKleinRegina No, you do not have to bring your voter information card. It makes this faster, but it is not required.

Put an "I Voted" sticker over each of your eyes, and your ears.
Now you are prepared for the next 4 years.#skvotes

The campaign will not be memorable, as the media’s skewing of coverage can be summed up this way:

.@jenkew It's sad that the first question put to us regarding our candidates is do we have as many convicts as the NDP and @SaskParty?

You could say the conservative media got what they set out to preserve. I hope they enjoy the next 4 years of more scandals and little positive change.

Darcy Moen, involved in a business solution to decrease drunk driving, sent me the following criticism of Wall and Broten:

As long as politicians think DUI’s are nothing more than parking tickets…….yes, attitudes need to change, and both Brad Wall and Cam Broten need to reconsider their support of the indefensible.

Sure, people faced the music, went to court, and paid their debt to society. But, we don’t allow people who were convicted of fraud become finance minister. Should we let those who are proven and convicted of poor judgement be put into a position where they can make the rules that they chose to ignore?
Everyone deserves a second chance? Tell that to the widows, widowers, parents and orphans that are the victims of drunk drivers, where is their second chance to come back to life taken from them?

Drunk driving is a decision, a very WRONG decision.

Brad Wall’s government is attempting to make alcohol sales and distribution easier, and is profiting from the sale and increased sale and accessibility, yet he has not made any plans to offset those gains with more responsible use of alcohol, nor has he plans to reduce the already way to high incidents of drunk driving that is sure to occur with more availability (and consumption). Why not move some of those profits into reducing drunk driving?

Mr Brad Wall, and if elected, Cam Broten, both need to take a hard look at this problem, and work to find solutions. Mr Wall is currently the man at the wheel, and his administration and crowns he controls have not been fair to the companies like Zero 8 that are also working hard to provide services to take drunk drivers off the road. SGI and the Minister responsible for SGI have been making and placing the majority of public service ads promoting bus rides, friends, and taxis as a means to a safe ride home, and very few ads include designated driver companies like Zero 8. When the Minister (June) was asked why she could not include designated driver companies like Zero 8 Designated Drivers, she said a crown corporation could not promote for profit enterprises. What the heck is a taxi service? Its a FOR PROFIT Enterprise! The problem and complete misunderstanding and attitude reaches from the bottom, to the very top.

On a side note, the coverage of other registered parties with full slates in this election has been so pitiful. The revelation of how many convicted drunk drivers there are in both the Sask Party and NDP, prompted the media to attempt to be fair by asking the other parties if they too had convicted criminals in their ranks.

.@jenkew It's sad that the first question put to us regarding our candidates is do we have as many convicts as the NDP and @SaskParty?

Last Saskatchewan election, this happened instead thanks to our lackluster media ignoring the Greens who fielded a full slate of 58 candidates.

A snooze fest of a debate took place, and CBC couldn’t find anyone not involved in the broadcast who watched it. Basically it had the viewership my blog has on a Sunday morning.

I made some effort to fix the problem by showing the broadcasters there was public opposition to their method. Even newspaper columnists who usually have a rosy view of the world were disappointed in the prospects of the following four years.

Here’s a portion in High Definition:

And another segment (it’s also included in the long video at the top, so if you’ve seen that, there’s probably nothing new in this clip either.) 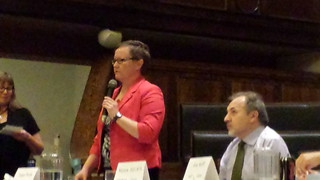 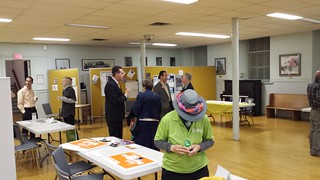 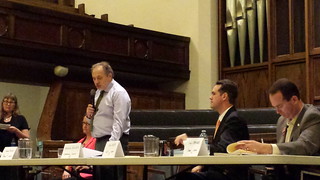 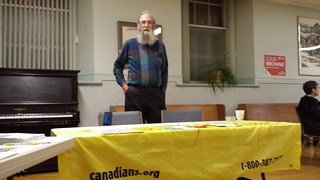 ADDED:
So you don’t have to imagine what it would have been like if a Conservative candidate had bothered to show up:

Monday morning CBC news with David Common led with the story of Elizabeth May’s failed PPG skit on Saturday. How’s that for perspective? These are the people who until last month had been considering not even letting the Green Party leader speak at the televised leaders’ debates, and now she’s a top story two days after a gaffe.

May told Hiscox that she was attempting to play off her image as a “goody-goody two shoes” in Parliament.

“I never heckle, I never swear, I’m respectful to everyone, so I’d gotten the idea that as skit material, it would be be funny if I were different from how I actually am,” she said.

“That obviously doesn’t work… especially in a clip out of context from the whole event.”

"There's gotta be a closet here somewhere," @ElizabethMay says of @pmharper's absence at the #pgd15.

.@BRSommerville @canadiancynic Seems Elizabeth May tired and tipsy is still a better orator while swearing at cabinet, than any other MP.

“I was trying — and obviously failing, badly — at delivering something a bit edgy, and in hindsight, should have realized that I had travelled so much in the previous 48 hours that I was probably too sleep deprived to pull it off properly.”

@AndrewMitrovica @VoiceOfFranky If only the fuddle duddle federal cabinet had more class than a killer.

Dear media: Remember your mission to "afflict the comfortable?" Elizabeth May was simply showing you how to do your jobs. Awkward?

Conservatives openly stoking racism & Islamophobia, Liberals sold our rights away for votes, but we're mad at @ElizabethMay for cussing.