This is one of those things about our planet that people would want to look up on the Internet, but won’t be able to if it happens.

Growing up in Saskatchewan, prior to cell phones, it was common to encounter a car at the side of the road, and you’d slow and stop to check they were okay. They might not see another person pass by for hours, and could be in need of a rescue. We did save the lives of some elderly neighbours once who’d slipped into the ditch and couldn’t dig out and would have frozen if we’d not pulled their truck out and got them warmed up.

The other week I noticed this amazing story of a woman who used Facebook to send out an SOS, and people identified where she was and found a farmer able to come to her aid. The story gets more amazing:

Write your MP and the weather office now please.

you’re not going to like this but Environment Canada has decided to break the Weather Alert feature for the entire Toronto area. Contact your MP. https://t.co/8ErKVEH7xZ

In a year where unusual emergency was the top news story for 10 of 12 months, you'd think they'd have a little self awareness.

Regarding closing weather radio stations, in a year when an unusual emergency was the top news story in 10 of 12 months, seems like a precursor to more embarrassing stories of how the government cut pandemic alert systems just prior to 2020. In Regina, crates of N95 masks were landfilled prior to 2020 and not replaced. Who needed them, right? Long Term Care home workers, dealing directly with COVID-19 patients still don’t have N95 masks at work.

Internet isn’t a replacement for weather radio, as cell phones don’t stay charged long in an emergency. Don’t make the mistake of closing weather radio access for Canadians to save a couple bucks. Additionally we should have tornado sirens in Regina, but don’t because it’s deemed old technology. We’ll miss having it when it’s too late.

We should be building onto what previous generations provided us with, not dismantling their working systems.

I’m moving into the box unpacking stage now, except there are still some other boxes to pack up and move first.

It rained last night and showed a double rainbow to lots of people. The rain again this evening wasn’t hard enough to stop the baseball games going on at Lion’s Park. 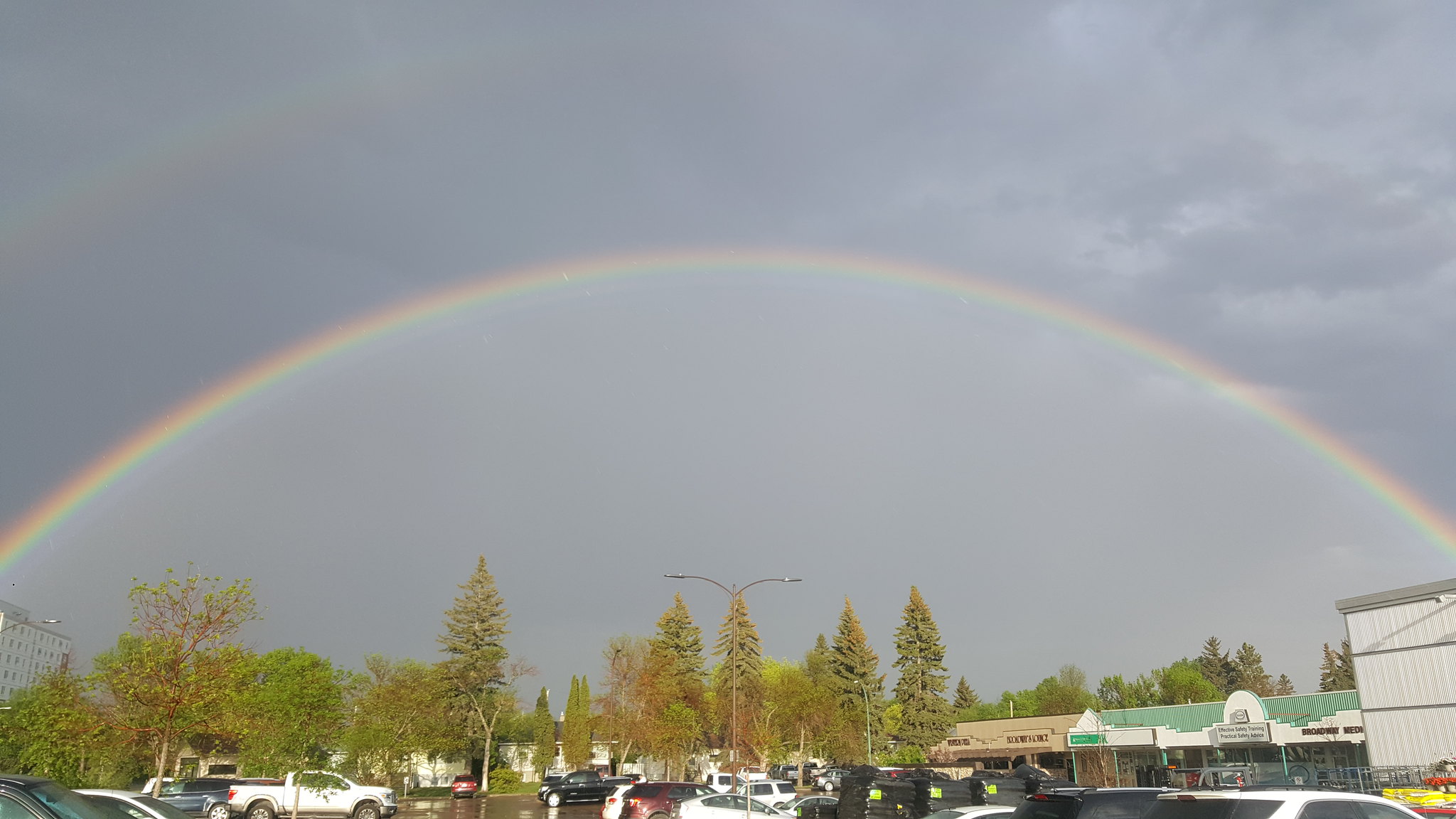 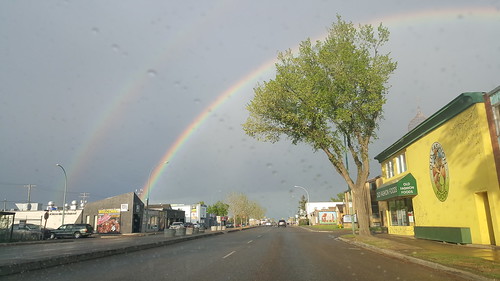 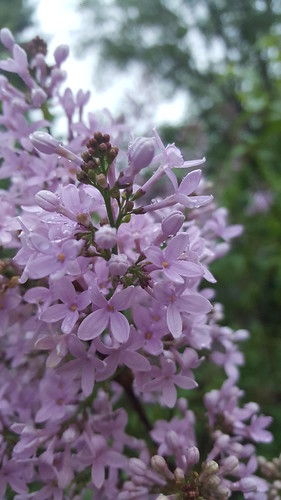 I had a good New Years and Christmas holidays. A shipping error, in my favour, was perhaps the most notable event. The weather was cold, and it’ll be -25 or colder at night this week, which hasn’t happened that long since perhaps last January.

Was too busy to blog, but there was a letter in the local paper that summed up the state of Saskatchewan politics very, very well. The big problem may be that there’s no perception out there that anyone else would do much of a better job than Wall, even though the contrary is probably the case.

Just remind me again why Brad Wall is so popular?

Regina and Saskatoon have the highest crime rates in the country. The overall provincial crime rate is twice the national average. We have the highest homicide rate in the country. Our rate of incarceration is double that of every other province in Canada. Our criminal justice system ranks ninth among the 10 provinces. Racism is rampant and street gangs are on the rise.

There are not nearly enough child care spaces to accommodate the needs of working parents, and unfair taxation methods severely hamper those few in existence.

Last month 7,200 construction jobs were lost. The number of people needing social assistance has doubled in the past year.

The GTH is a putrid scandal and Wall refuses to explain how Sask. Party supporter Anthony Marquart made $5 million, and Robert Tappauf made $6 million on the deal. Auditor Ferguson has stated unequivocally that she “did not conclusively state there was no conflict of interest, fraud or wrongdoing with respect to land transactions related to the GTH.” It is clear that Wall’s challenge to the federal carbon tax is simply a way to deflect attention away from the GTH fiasco.

The privatization of MRIs is contrary to the Canada Health Act. We have more doctors from India, Nigeria and Pakistan than any other province in the country. We spent $50 million on a “lean” program sold to us by an American who imports Japanese instructors to increase employee productivity, as they purportedly did in a Toyota automobile plant. Health care in Saskatchewan is a mess. Home care is non-existent.

Although Saskatchewan has the highest per capita carbon emissions in the country, Wall refuses to acknowledge that climate change is a reality and our greenhouse gas emissions are a problem. We have spent more than $1 billion on a coal carbon capture plant that is not fully operational, and countries that Wall says we can sell to already get 25 per cent of their energy from clean sources with plans to achieve 50 per cent in 15 years. Due to the plant’s failure to provide enough CO2 to Calgary’s Cenovus Energy we have paid them more than $20 million in penalties. The Sask. Party has received more than $3 million from Alberta oil companies, and Cenovus is their biggest donor.

The privatization of liquor outlets was conducted in a shameful partisan manner, with Sobeys getting the lion’s share. Sobeys is a Maritime company and that’s where their profits will go.

The cost of failed SaskPower smart meters was $47 million, and now we’re going to try them all over again.

Wall refuses to release Husky oil spill records in spite of the privacy commissioner urging him to do so.

We have a $1-billion deficit and have borrowed another $4.6 billion just to cover operating costs. The 2016-17 budget is titled “Keeping Saskatchewan Strong.” The only thing strong in Saskatchewan today is the corrupt stench of a government’s failure to govern.

Have a look at what Mars would look like if it had a proper weather satellite.

Construction on the #YQRstadium site is really progressing. Here's how it looked when @Capital_Pointe was announced. https://t.co/JtjcDu18yJ

Wow, the progress on the #YQRstadium construction is amazing. Seats & turf in already. Sure it's not ready for 2016? pic.twitter.com/jwBHvcnC6O

We’ve only hand planted trees (and their heirs), but we also have smoke.

If "forest fires" or "smoke" isn't trending in #YQR right now, what the heck are people looking at? It's like NYC smoggy when smoke blows in

In just the last couple of hours, Regina has been enveloped in forest fire smoke from up north. pic.twitter.com/T5QFLFFHAz

@GlobalRegina we're visiting friends near Wakaw and woke up to the smoke and orange light like this pic.twitter.com/H8kUN4sMa4

Not a great day for the beach at Candle Lake. Smoke plaguing the community. pic.twitter.com/VzjSfeRx8o

Oh wow it is THICK outside. Yikes. This is not going to be a good week of working mostly outside up in Saskatoon.

Here's a look at how widespread those air quality statements are in sask- smoke is hanging nearly everywhere #cbcsk pic.twitter.com/Uc4RI3c5TY

@GlobalRegina The smell of smoke is heavy in the Cathedral Village air. pic.twitter.com/WXUsXwSjoz

It’s the longest day of the year, and the clouds were very interesting this weekend. Our first proper rain of the year was a hail storm with pea sized hail. Today’s was just rain off and on. 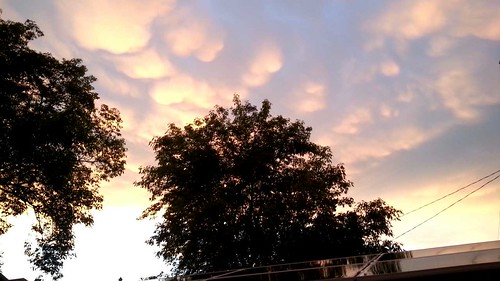 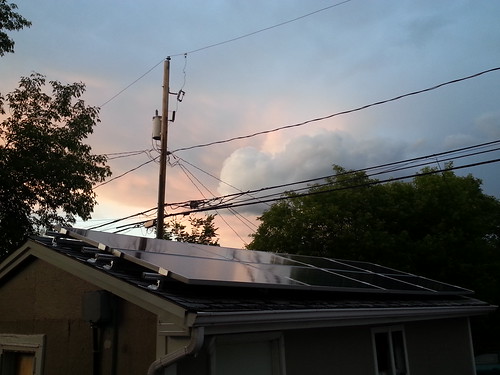 It was the Cathedral Village Arts Festival today, a crowded street fair down 13th Avenue in Regina. It was hot, and it didn’t rain (like it does many years). I saw tons of people I knew, and many stopped by to talk at the Regina Car Share Co-op booth where I was volunteering. One of the police officers who gave me CPR walked by, so I obviously introduced him to the person I was talking to, and they shook his hand and thanked him for his service.

Slightly related to the sunny day… my solar panels have had near perfect days the past week. That’s how little cloud and zero rain we’ve seen most recently in May. A lot of Saskatchewan is experiencing dangerously dry conditions, and risk of fires remains rather high.

Now back home after passing some #YQR landmarks. pic.twitter.com/T4SktQOCr4

There’s risk of a fiery Love in Saskatchewan’s north (actually central region, but north of most people, so us southerners call it “north”, like Americans do to all Canadians, some of whom are further south than many Americans).