The RCMP put out a disgraceful press release following a vehicle attack on First Nation people rallying near a Residential School site.

Manitoba’s new Minister really put his foot in his mouth. The leader of the Official Opposition put him in his place.

Why are Canadian Conservatives like O’Toole and this Manitoban willing to publicly defend the Indian Residential School genocide program?

Then, there are the bodies that will never be found, like the infant tossed into the furnace[!] as described by Irene Favel, a survivor.

We have the names, why don’t we have convictions?

Why are there Canadians willing to deny the Residential School system was a genocide perpetrated against Indigenous people of Canada? Maybe the top politicians saying this Isn’t Who We Are, and the paid radio ads have an impact on the Denialist psyche?

The Minister doesn’t seem aware, or in charge since this is his tweet upon the discovery of the graves:

CBC and other media need to recognize the following as true if we’re going to advance as a society. It’s likely to make them, and you, uncomfortable. Growth isn’t automatic and easy.

I wrote for @washingtonpost about the failure of the Canadian media, the beginnings of the Genocide Convention and why Canada seems to think it's okay to commit genocide, as long as you don't call it that.https://t.co/qCI9wqzRYA

– Climate change has become a crisis.

– We won’t survive as a civilization this century without significant, yet still possible, changes to our daily lives. That means changes to our economy.

– The American President should not be quoted in headlines because more often than not he’s lying to manipulate people.

– Billionaires have too much power, and far too much money and need to return it to governments for massive investment in social programs like healthcare for Americans without any.
“all these billionaires and this 9 year old has to pay off his schoolmates’ lunch [debt]”

Jun 10
Jeet Heer (Retweeted Waleed Shahid):
“The Koch Brothers understand, and other billionaires do too, that centrist Dems are a crucial line of defense in stopping social democracy.”

– Canadian Conservative politicians have no feasible plan to deal with pollution, and their party leadership opposes real action to reduce pollution on time.

– Regina lacks the transportation infrastructure to meet its 100% renewable by 2050 target.

– The 2050 target is insufficient to meet our objective to survive the climate crisis.

Today at House Committee on Budget hearing @KHayhoe speaks to @UCSUSA analysis: Sunny day #flooding due to sea level rise already affecting coastal properties & at the end of century a trillion $ could be at risk – we're not adapting fast enough. https://t.co/PfNnupU1Kc pic.twitter.com/8lS88IyaeV

It’s been another amazing day, and the Sun isn’t even down yet.
Attended a lunch-and-learn this morning with @ElizabethMay at the new CAC #UofR building.

Earth is sick with multiple and worsening environmental ills killing millions of people yearly, a new UN report says.
The report's authors say something can still be done. "There is still time but the window is closing fast." https://t.co/PnlbcTajpR

Then we got a tour of Cowessess’s Renewable Energy facility a few kilometers past their gas station east of Regina on Arcola Ave.

Now May has left for Fort Qu’Appelle for a forum on climate change. It’s in Scheer’s home riding, but he declined to attend! (The coward…)
The official video of the event had sound issues. Here are some clips:

And… then Estevan is poorly represented by a rambler, who wandered into insulting a woman who heckled him for rambling about how climate change isn't "a fact". #carbontax

I laughed when he said that bit about CBC not mentioning the protest.
Here he is, on my TV.#YQRtownhall #cdnpoli #carbontax pic.twitter.com/btZFVJffgK

Good housing affordability question.
Trudeau only wants to cut homelessness by 50% "in the coming years".
And doesn't have plan to fix affordability of housing.#YQRtownhall

It was the 3rd least-fair question, keeping in mind one asked that he be hanged, and another asked for spy cameras out of his bedroom.

He even managed to answer the person who started with calling him a liar (true) & ended with saying he should be hanged for treason (crazy hoax).

It was the protester with the microphone that summed things up best, I think. Many of the students & a few others did well.#cdnpoli

#YQRtownhall
-A woman who has heard Conservative lies and believed them said he should be hung. He still answered her 3 hoaxes.
-A student who wanted to pin him down on his criticism of boom-bust towns and their infamous abuse of women, when apparently she finds the oil industry and all the people around it entirely delightful.
-A woman expressing solidarity with First Nations opposed to pipelines that will poison their land, water, and air, and put the PM in his place for dodging answering too.

The Provincial Government had peaceful protesters arrested on Monday for having a tipi in Wascana Park. The government’s position was that the grass would be harmed, and the tipi would be a distraction from the Canada Day festivities, and probably for the National Aboriginal Day festivities in three days too.

As you can see, it’s quite distracting when a tipi is at a Canada Day party.

Perhaps they didn’t want its smoke causing a distraction since the diesel or gas powered lights used in that same park space are already pretty toxic and loud: 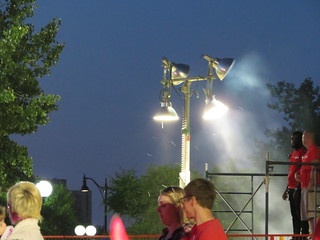 Or perhaps they didn’t want it to upstage the tipi set up even closer to the Legislature last Canada Day? 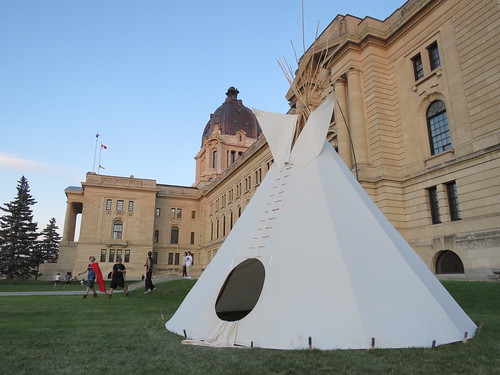 @reginapolice forcing peaceful protesters out of a tipi on Crown land is a little too symbolic of the injustice the protesters are there to shine a light on. I wouldn't describe that as "professionalism".#skpoli

After requiring them to dismantle the ceremonial camp tipi set up to protest @SKGov's ongoing removal of Indigenous children from their families, @reginapolice @evanjbray are now holding 6 people in custody.

Chelsea Flook, spokesperson for Wascana Park protestors says the six people arrested will be released after tipi comes down. They could face obstruction of justice charges. pic.twitter.com/jiP7YFrgHu

Holding arrestees hostage on tentative legal grounds is maybe the worst thing i've ever seen in my lifetime of activism #skpoli #yqr https://t.co/h9qYN2hZ6E

This is satire but it does talk about what a lot of people are saying about what happened to the Justice For Our Stolen Children Camp.

'Think of it as an historical re-enactment’: Regina park cleared of Indigenous demonstrators before Canada Day https://t.co/6O5itJY9jj

A man with a group of people went looking to injure First Nations people, from their truck.

A hospital won’t put the dying woman onto organ donor lists to get replacement organs for ones damaged in the attack, because she’s had alcohol in the last half year.

Hate-crimes everywhere you look in Northern Ontario. Can something not be done besides prepare for the funeral?

"The assault was not labeled a hate crime."