3 years ago, I explained what was happening with the Duffy trial. Today it came to a close.

whatever else to think about #duffy verdict, good for Judge V to cite role of "authoritative figures"in the choices made

Judge says @stephenharper advised #Duffy PEI is now your primary residence. Justice "this was NOT a minor bureaucratic official #cdnpoli

Regardless of the outcome, you know it's gonna be Harper's fault. #duffygate https://t.co/HLfpmLe7WG

Judge says he believes that a memo (see link) on residence may have been interpreted the way #Duffy says he saw it https://t.co/0k8FQXoWT0

The Duffy Trial has been a bit of an expose on how the Harper Cons’ PMO operated. It’s not pretty.

The comments made about Sona and Finely are nothing to sneeze at either.

With Sona destined to sit in jail, and Finely in a grave, it all seems a little bit of an academic discussion now, except the Con’s supporters are now clamouring for a referendum to salvage (savage?) our electoral system.

What the PM said then, and how it stacks up against evidence submitted in court: @pnpcbc #Duffy fact check #cdnpoli http://t.co/okoZsW4OBB

Duffy’s trial is giving facts about Harper’s criminal gang in his office.

I wonder if she gets paid, to ask that.

In the same time frame, Krause received significant funding from the oil, gas and mining industries and has said 90 per cent of her income in 2012, 2013 and 2014 was drawn from speaking fees and honorariums funded by industry sources.

Krause said the “90 per cent” comment was out of context, because she had “zero” income aside from her speaking arrangements. Krause said she earned money by working part-time as a piano teacher, among other things. She said her two most recent speaking gigs were not paid.

I’m not sure Fonda needs the money as badly as Krause makes us out to believe that’s her motivation.

As you probably know, “Fair and Balanced” is the Fox News tagline that exists to trick the more easily fooled into thinking that’s what their actual objective is.

Check out today’s story from the Vancouver Observer about “@FairQuestions”, a Conservative friendly researcher who took thousands of dollars in speaking fees from oil companies and testified for Conservative ends in Parliament. This, after being connected to lucrative oil money roles through Senator Duffy.

The $10,000 fees were paid by the Association for Mineral Exploration of BC (AMEBC), Canadian Energy Pipelines Association (CEPA) and Taseko Mines between March 22nd and June 6, 2012. The Inuvik Petroleum Show paid $6000 for a June 21 appearance, along with Amanda Lang and Ezra Levant.

The B.C. mining group also appeared to go out of its way to pay her.

“We usually don’t have fees,” said John Buchanan, Director of Communications and Public Affairs of AMEBC. “It’s a professional opportunity. It’s a way for speakers to give back to their industry.”

4. Senators shdn't be arranging income for a parliamentary witness. Does this need to be said? #cdnpoli

ADDED: One of the most disturbing points in the video is when Krause says she thinks the debate has been skewed because big money from the cities is drowning out small voices in rural Canada, and that funding should be “out in the open”.
—

There are opportunities to support journalism in Canada that doesn’t take millions from the oil industry and the oil-soaked Conservative government.

Had you heard that the Conservative Party communicated with Enbridge, in secret, through Mike Duffy? If you don’t watch independent journalism online, you might miss important news like that.

The National/Vancounver Observer and CanadaLand are two independent media outlets in our country who can tell you the real story, because their funding doesn’t come from CAPP/Enbridge, and the Conservative government.

Think also about how Mike De Souza was laid off from Postmedia, after his reporting on the oil industry was about the only reason to read the National Post.

The Canadian people know when they’re being fed smoke and mirrors, and things taste very smoky and shiny right now.

+1 RT @mdemeny: So the letter refuting the RCMP as an agent of the governing party by policy had to be vetted by an agent of party. Ironic.

“Thanks to the RCMP, we know that senior officials in our government were conspiring to cover up tens of thousands of dollars in (seemingly) improper payments to senators. The internal emails and interview transcripts published by the RCMP show Wright, Duffy and a host of lawyers and senators doing all kinds of things they would never do if they didn’t think they could keep it secret.”

“The way our legal system is set up, we will never know why the Mounties decided not to proceed unless it comes out in court if the force proceeds with charges against Mike Duffy, which is expected in the coming weeks. But it’s up to politicians, not police or judges, to tell us how it is that the prime minister’s chief of staff is able to make a secret payment to a sitting legislator without facing criminal prosecution.

There is no way that should be legal.”

It happens with plenty of Harperites. They Resign, no wait, they were Fired. Depending on who you are, there’s a different tale of what caused the undesirable to fall under the Harper Omni-Bus. 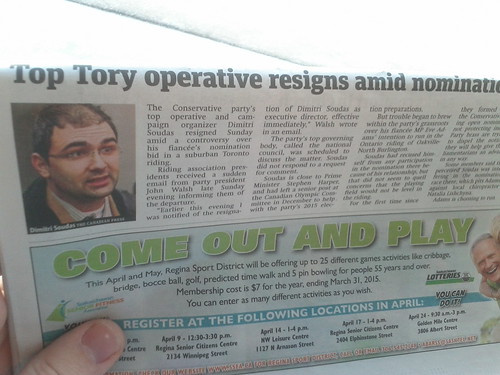 Nigel Wright who worked in the Prime Minister’s Office until last year was also Resign-Fired.
Fired.

Michael Sona was Resign-Fired too. Maybe this needs a name or hashtag? #HarperFired?
Resigned.

I really have to disagree with Dr. Barnhart, who had the power to sign, or refuse to sign laws of Saskatchewan into effect while Lieutenant Governor, that he is a powerful person. Now his influence may be lessened, even to the point where Global TV won’t keep a promise to him, but he did get invited to to a prestigious lecture for the UofR too, didn’t he?