The Liberals Government has done squat in Regina since coming to power, when it comes to (hydro) power generation. I’ve produced over 5 MWh of solar power, and sent almost 3 MWh of that onto the electrical grid, while three layers of government in Regina have produced a whopping goose egg, 0 MWh.

“The Government of Canada is committed to reducing greenhouse gas emissions – which includes greening its own operations and making emissions data available to the public – in order to lower costs and leave a healthier, cleaner planet for our kids and grandkids.”

This is focused only on NCR Ottawa. What about federal government buildings in #Regina? *I* still produce more #solar electricity than them!

Is this all buildings nation wide, or only the NCR?

3 years ago, I explained what was happening with the Duffy trial. Today it came to a close.

whatever else to think about #duffy verdict, good for Judge V to cite role of "authoritative figures"in the choices made

Judge says @stephenharper advised #Duffy PEI is now your primary residence. Justice "this was NOT a minor bureaucratic official #cdnpoli

Regardless of the outcome, you know it's gonna be Harper's fault. #duffygate https://t.co/HLfpmLe7WG

Judge says he believes that a memo (see link) on residence may have been interpreted the way #Duffy says he saw it https://t.co/0k8FQXoWT0

The Liberals record? Not much better.

“I can’t answer the question about the former government, what their reasons were,” said Sajjan, also noting he does not believe any of the metadata inadvertently shared could have ended up in the hands of any countries beyond the Five Eyes.

Data: Your IP address.#Metadata: When you were last online.#NSA compares that time to a crime, subjecting you to profiling. #CSE

In the good old days, Canada’s spy agencies were not supposed to spy on Canadians. Government departments are also supposed to benefit from their research into vulnerabilities in computer systems, because holes can be closed. CSE was, according to The CBC, and The Intercept, intentionally not filling holes it found in the Google App Store and a popular web browser, in order to infect targets of spying. The result is that hostile governments and hackers could also use these holes if they independently discovered them.

Monday morning CBC news with David Common led with the story of Elizabeth May’s failed PPG skit on Saturday. How’s that for perspective? These are the people who until last month had been considering not even letting the Green Party leader speak at the televised leaders’ debates, and now she’s a top story two days after a gaffe.

May told Hiscox that she was attempting to play off her image as a “goody-goody two shoes” in Parliament.

“I never heckle, I never swear, I’m respectful to everyone, so I’d gotten the idea that as skit material, it would be be funny if I were different from how I actually am,” she said.

“That obviously doesn’t work… especially in a clip out of context from the whole event.”

"There's gotta be a closet here somewhere," @ElizabethMay says of @pmharper's absence at the #pgd15.

.@BRSommerville @canadiancynic Seems Elizabeth May tired and tipsy is still a better orator while swearing at cabinet, than any other MP.

“I was trying — and obviously failing, badly — at delivering something a bit edgy, and in hindsight, should have realized that I had travelled so much in the previous 48 hours that I was probably too sleep deprived to pull it off properly.”

@AndrewMitrovica @VoiceOfFranky If only the fuddle duddle federal cabinet had more class than a killer.

Dear media: Remember your mission to "afflict the comfortable?" Elizabeth May was simply showing you how to do your jobs. Awkward?

Conservatives openly stoking racism & Islamophobia, Liberals sold our rights away for votes, but we're mad at @ElizabethMay for cussing.

A former Mountie and CSIS operative thinks Harper’s so called anti-terrorism bill is scary and unnecessary.

He spent years tracking dangerous radicals without the powers the government wants to give to CSIS.

“I find it a little convenient that in the past few years that these radicalized people are the biggest threat to ever hit us,” he said. “There are more people dying because of drunk drivers or because of gang violence.”

“When our leaders start talking about tentacles and jihadis and barbarians, it’s adding fuel to the fire. It’s actually increasing the likelihood of that happening.”

Mr. Lavigne said the prime minister’s language reminds him of fascist leaders like Mussolini and Franco.

“Some of these tactics are taken right out of the fascist playbook,” he said.

“They’re not crossing the line. They’re using the language to appeal to the emotions, which is one of the first stages. Disinformation being the second, which I think they also use. But they’re not fascist. I’m not saying the government’s fascist.”

Media in Ottawa are too busy eating each other alive to focus on the main course passing authoritarian Bill C-51.

@laura_payton As this is being triggered now, Q is: if a PPG Member is offended at another's remarks & complains:would this be "just cause"?

Following up on my 2010 blog post on solar for the White House, it takes almost 3 years to get solar added to a historic national building. 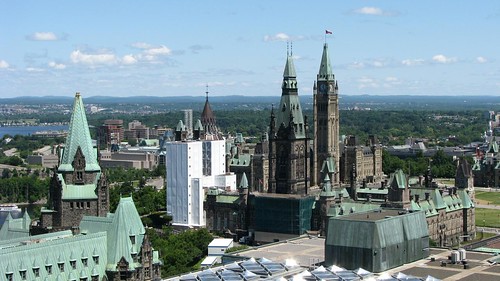 That’s why we should all get started with pressing Parliament Hill’s renovation to include commercially available PV solar panels to the south facing slopes of Canada’s iconic government building.

Saskatchewan’s lovable radio host asks: “What are you thinking and feeling about 1) our Canada today b) yesterday on the “Hill” and c) the cowardice and evil in our midst. Is Canada different today? How do we deal with terrorism and radicals?”

1) Worried the attack will be used as an excuse to make it harder to visit our public buildings.
b?) You mean 2)?
c) OK, we’ll stick with letters now. The cowardice and evil is refusing to deal with our fossil fuel addictions, and going to war to secure a source in the Middle East. How do we stop these radicals? Let’s do a better job than we do for stopping a nut from obtaining a long gun to shoot a soldier and Parliament.

Fear must not rule us. If 1 man can spread so much fear and hate, imagine how much openness, love we can spread as a whole nation #cdnpoli

A sad day of note in Canadian political history, as Parliament Hill was under gunfire today. A soldier was also shot at the nearby War Memorial.

Putting the day’s events into perspective though, are Canadians less safe today because of our political leader’s choice to take us to war in Iraq against ISIS? Possibly. That threat shouldn’t mean a single change to our daily lives though, since we don’t alter our behaviour to avoid the much more deadly threat of being killed by a home-grown drunk driver.

Please Canada – be safe but don't let this change us the way 9/11 changed the US forever. #cdnpoli

I’m collecting reports as this unfolds, because it will be interesting to see who got what wrong.
“Credible sources tell @SunNewsNetwork there may be as many as five active shooters in #Ottawa sunnewsnetwork .ca/sunnews/canada/archives/2014/10/20141022-100348.html ”

CNN breaks away from live coverage of a shooting at Parliament Hill, to talk about a "lucky calf" that was born with a 7 on its head.

The Sergeant at Arms taking down (one of) the gunmen. Never seen/heard anything like it.

Easty for me to say from where I am, but what should happen, tomorrow or when this is over, is for people to assemble on Parliament HIll…

… in their thousands, unarmed and unafraid — to claim it, to protect it, and to say a giant fuck you to the people who did this.

If I was still in Ottawa, I’d be on the Hill tomorrow, inviting others to watch the partial solar eclipse through my camera.

Mansbridge reporting there was a shooting also in the Rideau Centre Mall, which is a 10 minute walk from Parliament Hill. #Ottawa

RT @Andrew5hepherd: GM of Rideau Centre just told CFRA there has been no shooting there. But the mall is on lockdown. #OttawaShooting

Just arriving at RCMP presser. Was patted down and searched before entering the national division building.

@Yens_Pedersen @martens11 @SLangeneggerCBC Like cancelling the citizenship ceremony for an honoured guest who stood up to the Taliban!

So this could be one person, right? Shoots soldier, walks to Centreblock, enters, is shot by sergeant at arms. Anything to contradict that?

Witness says this is the suspect's car. He says two men climbed out. No licence plates on it. pic.twitter.com/varoI6jIB1

A body is seen 2 minutes later:

A body outside ground at library of parliament pic.twitter.com/gtxWamyWmQ

Guard o fHonour at the War Memorial was instituted in 2006 after a July 1st incident of vandalism. #wikipedia #OttawaShooting #PrayForOttawa