And… then Estevan is poorly represented by a rambler, who wandered into insulting a woman who heckled him for rambling about how climate change isn't "a fact". #carbontax

I laughed when he said that bit about CBC not mentioning the protest.
Here he is, on my TV.#YQRtownhall #cdnpoli #carbontax pic.twitter.com/btZFVJffgK

Good housing affordability question.
Trudeau only wants to cut homelessness by 50% "in the coming years".
And doesn't have plan to fix affordability of housing.#YQRtownhall

It was the 3rd least-fair question, keeping in mind one asked that he be hanged, and another asked for spy cameras out of his bedroom.

He even managed to answer the person who started with calling him a liar (true) & ended with saying he should be hanged for treason (crazy hoax).

It was the protester with the microphone that summed things up best, I think. Many of the students & a few others did well.#cdnpoli

#YQRtownhall
-A woman who has heard Conservative lies and believed them said he should be hung. He still answered her 3 hoaxes.
-A student who wanted to pin him down on his criticism of boom-bust towns and their infamous abuse of women, when apparently she finds the oil industry and all the people around it entirely delightful.
-A woman expressing solidarity with First Nations opposed to pipelines that will poison their land, water, and air, and put the PM in his place for dodging answering too.

I’ve been to two other Gwynne Dyer lectures at the U of R, and each time they are very interesting presentations of what has happened in the world. There is also a little predicting going on, so if you’re curious what could happen, settle in, and listen to it all.

Media can't resist a feeding frenzy. He adds to the mass though and contributes to problem. "Hard to prevent this inflation".#GwynneDyer

What will happen? Terrorists will age out of the game. The End

We don't have a lot of time left in #climatechange we might already be in a runaway rise in temperature. #GwynneDyer

How do you distribute abundance fairly?
First we have to deal with shitstorm from Donald Trump.
The end.

Mind you, the fact there’s legal action in the cards hasn’t stopped SaskPower from awarding the firm a $4 million portion of the $45-million Island Falls Powerhouse Concrete Rehabilitation project.

Nor did a September 2014 SaskPower carbon capture briefing note, obtained by the NDP, which says SNC “is more concerned about getting paid for the 6.5 million than fixing the deficiencies of our plant.”

It goes on to note “very poor to no support from SNC Lavalin,” and “serious design deficiencies” in the project.

SaskPower CEO Mike Marsh says “because there’s a contract dispute (with SNC) on one job, doesn’t mean we don’t use them on another job.”

I happen to work at the same university, the one primarily responsible for research that made Boundary Dam CCS possible:

Associate professor of marketing at the University of Regina, Lisa Watson, says “of course people are going to be upset” over the issues at Boundary Dam.

The bigger question, she says, is whether they should be.

The consumer push for more environmentally sustainable options and clean energy is a “major change” for government, she says, and perhaps people shouldn’t be upset when projects involving groundbreaking technology don’t go as planned.

Carbon capture has “huge potential, and if it was working properly, we’d be shouting from the rooftops,” she says, and “to not do it at all, I don’t think that’s the right thing.”

QP: Wall continues to tout interest from around the world, notes dignitaries that have visited. #skpoli

Premier Brad Wall touts Sask. carbon sequestration project
Some premiers are sitting out today’s climate change summit in Quebec City, but Saskatchewan Premier Brad Wall is there, talking up the province’s efforts to capture and store carbon dioxide.
[…]
Wall told an audience that the world needs to follow Saskatchewan’s example if there are to be serious reductions in greenhouse emissions.

I tried to find Brad Wall on a rooftop shouting to people about it, instead there is video of him on Sun News TV boasting about it to Brian Lilley, and more than a smattering of articles on the Web boasting about it.
“YouTube’s great, you can learn anything on YouTube.” – Premier Wall 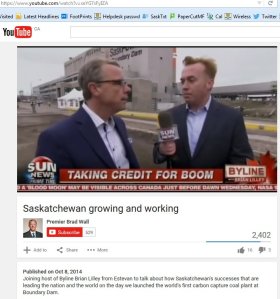 Boyd admits issues surrounding the plant have “a bit of a negative connotation,” adding “I think any time there’s losses, any time there’s problems, there’s certainly a degree of loss of confidence.”
On the other hand, he thinks taxpayers “would rather have SaskPower delivering power to them,” rather than the private power companies that operate in other jurisdictions.

Wow, neat way for Boyd to suggest the alternative to fixing SaskPower is only to ditch the Crown Corp and go with a rob-you-blind private power corporation instead. (The Saskatchewan Green Party is proposing converting SaskPower into a Crown Co-op instead.)

Holy spinning neckties Batman! Our loss of confidence is with Bill Boyd and those politicians that chose carbon sequestration over renewable energies. The Sask Party keeps green washing this sequestration turd as if we asked for it in the first place. Want to restore our confidence? Lets go 40% wind and solar by 2020. But on the other hand, maybe tax payers should waste their money on subsidizing the petroleum oligarchy. Oh and ‘groundbreaking’ here is a pun, nothing more.

There’s also the huge matter of SNC-Lavalin’s criminal charges. The Federal government stopped dealing with HP after a bribery conviction for that company.

More from Global News Regina.
“SaskPower says the project is now on target to be fully operational by the end of 2016.”

.@drmarcspooner It's very ironic that the province that has more CO2 production (per capita) than any other, fails to provide it. #skpoli

ADDED:
“Out of the more than 250 companies year to date on the World Bank’s running list of firms blacklisted from bidding on its global projects under its fraud and corruption policy, 117 are from Canada — with SNC-Lavalin and its affiliates representing 115 of those entries, the World Bank said. ”

It was a real dog’s breakfast at this one, where everything from polls to strategic voting discussed frankly by 3 political experts from Regina. Actually it wasn’t a complete mess, it was a well organized event, but the dog’s breakfast thing will make sense if you watch it all.

@MMandryk opening in #URPAIS panel "I hate polls!" "And why you guys should hate them too & why they are not good for a democratic society."

I was impressed to learn that France had made new commercial buildings do this. I’ve felt badly that new buildings going up all over the University of Regina campus since I started paying attention to it in 1998, haven’t put a single solar panel up on them. There’s a building on Research Dr. with a round skylight that looks like a CD player, that would have been a perfect spot for some solar panels. At least the RIC building in 2006 had a partial green roof built onto its shady side.

The Calder case about the Niska people. Argued no treaty so they had Aboriginal title to the BC land. Crown: settlement extinguished title.

Millions lived in North America hundreds of years ago, but settlers viewed it as empty.
By 1867, only 150000 indigenous people remained alive in Canada.

Our country must face and address tough issues at all levels of government.
Largest Aboriginal population is in Toronto says Bob Rae.
Dynamic in the country is changing. Assimilation and powerlessness have failed.

Churches given the job of “throwing kids into the deep end, seeing who could swim”. #residentialSchools “it’s not a pretty picture”

The standard should not be set by the people who brought us the idea of #ResidentialSchools. That can't be the solution in modern time. #Rae

Indian affairs dep't., in its current form even, should be "blown up" (figuratively of course) #Rae #UofR

A process of negotiation must be used to replace the current structure of power Ottawa has over Aboriginals.

Canada has a history of colonialism, and currently still has structures of it. #Rae

"Our democracy is based on the rule of law" not populist. Protects minorities. #cdnpoli #Rae

#FIPA not a challenge to FN title, says #Rae. Rhetoric around trade deal is exaggerated. #cdnpoli

"Mr. Harper has done the minimum" "do as little as possible" "want people to leave reserves." #Rae People won't leave the land.

Dr. Shiva gave an interesting talk about how system we’ve built are being used to manipulate individuals in societies all around the world into valuing money over life.