I was distracted by things more awesome than blogging. What could that be? I’ll tell you some day.

For now, I’m back, complaining about litter.

Everyone is focusing on a crappy coffee shop chain in Canada, and giving them even more brain-space free marketing because too many people are addicted to the sugar and caffeine and cultural experience their wretched business offers the world.
The bigger story is how their disposable cups are such common litter that they’re almost as destructive and unsightly as smoking litter. The unit of measure of litter is measured in #Timmies, which counts how many littered coffee cups of waste are in a m^2 on the ground. Coffee shops and places selling “disposable” cups should be forced to charge a deposit on the cups and lids, and re-collect them for refund.

I tried this silly online app, and won on my first try. I chose the easiest 5 minute difficulty though.

I’m certain I won’t be able to use this dangerous writing app effectively. I should have a screenshot of it, just in case, I fail. It’s been nearly one minute, and I’ve not been interrupted, or felt I’ve had to look something up to support what I’m saying. There really is a lot of trouble in having to write without citation because I’m used to including hyperlinks, it’s what bloggers do.

The page seems to lack margins, so I am a little uncomfortable about this editor. Does copy/paste work? I’m scared to try lest I task switch to the mouse, and it assumes I’m not writing and deletes my progress. I’ve stopped watching the clock, because I have made it 2 minutes. Oops, that means I’ve peaked at the time.

The benefit of this app is no more than the one provided by Snapchat. Snapchat if you don’t know is a photo messaging app designed to delete your photo after someone has viewed it for a time length you set, up to 1 day, but more typically only a few seconds less than 10. I’ve used Snapchat for a few years now, and it’s actually pretty useful in showing people different parts of the world, thanks to its useful Story feature. Stories are automatically assembled video clips and photos you can add chronologically, and not from your phone’s Gallery.

This paragraph was the hardest to start, because I was searching for something next to type. My wrists are getting tired, as I’m racing against the clock to see how fast I can type also using the timer on this app. I’m about to be interrupted? Nope, false alarm. Whew.

That was a close one. Looks like I made it! Wow!
I win!

Keep writing or this app will delete all your work https://t.co/vfLO880D0S pic.twitter.com/qkTk4gtLKl

With the mountain of evidence piling up against dirty tarsand bitumen extraction, those who’ve sucked on the oilpatch teat too long to maintain any perspective, are desperate to save face.

Some think saving face means making fun of mine.

@saskboy @JJRossi_ @Fitzzer777 I am tired of the BS CO2 is not a greenhouse gas. A little jar, hahahahahahaaaa!!!

They’ll take assistance from scientifically illiterate trolls out of country, so long as they’re against anyone who talks honestly about climate change.

@saskboy @JJRossi_ there is no proof that CO2 is a GHG, there is much proof it is not. FYI it is still under study. U r victim of ignorance

They’ll claim that Al Gore invented Global Warming as a hoax, despite it being talked about by General Electric at least as early as 1956.

@Fitzzer777 Seriously? You're scared of science because you think politicians use smart people to get you?

No, these rednecks are mostly crude “rig pigs”, or “oilpatch arm candy”, as their own bios attest to those facts. They proudly proclaim that they have too much oil money, and not enough booze (it’s even in their hopefully satirical favourite songs). They’re proud racists, homophobes, and of “Pissing off hippies since 1982”. They’ll respond to criticism of their economic time bomb, with a crude hostility one would expect from blue collar workers who’ve traded their souls to crush the earth for a few dollars.

If the facts won’t work, they’ll make up a lie.

@reikokoyama79 You think Semis pollute much less now than in 2005, so that SK's GHG emissions went down overall? LOL http://t.co/vdCgbTVDbb

When caught, they’ll start stalking you and saying they wished you had no access to medical care or modern communication, so that you’d be silenced.

@tim3048 Oh great oracle Tim, tell us who else would be #DeadWithoutOil?@SheilaGunnReid @AndrewThrashes

@JJRossi_ @saskboy And! apparently tweeting on a piece of wood and not on an oil bases product. I congratulate him on that feat.

Hey Canada do you think it could be a mistake giving political power to people who've declared "nothing more to lose" and "too much oil $"?

I kicked this off by responding to a manipulative pro-tarsands promoted tweet, and a Calgary based Big Oil shill named Cody Batershill retweeted it.

.@OilsandsAction you're a terrible person, because your job makes the world die faster, and you've not quit it. #ymm #tarsands @StevenAuty

For the “oilsand” shills, who understand only crude insults, I say FOAD. Look it up if you want to be offended.

Canada Day started out like many other vacations spent in the city, with me volunteering an hour at a community booth. I was a bike valet from 11:00 a.m. to noon, watching peoples’ bikes for them. Soon after noon I rode off to find a few minutes of adventure before planning to return home to my girlfriend’s, where we were taking the kids over to a local park to meet another friend and her kids at 1:30.

I found the SaskPower propaganda booth with a game. It was a stationary bike where you could see how much power you could produce on it. 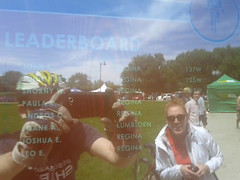 And that’s one way that SaskPower has tried to kill me ;-). As I finished at the top of the leaderboard, and biked off into the distance, I soon was collapsed on a bench near the band stand in Wascana Park. A crowd gathered, and two police officers came up to find me without a pulse and my bike helmet still on. They began CPR and called for a pair of EMTs on bikes who were on the other side of the park.

The EMTs arrived about 10 minutes later and after shocking me twice, my heart was beating again. About 40 minutes and a $325 ambulance ride later, I was in the Emergency Room of the General Hospital. I was scoring a 5 out of 15 on the Glasgow Coma scale in some regard, 8 in others. A 5 can mean that I could need to be tube fed, while 15 would be normal. So I was put onto a cooling blanket and given an immobilizing drug to cool my body down to just 32 degrees Celsius.

My first-hand memories from the next three or four days are few and I barely recognize them as my own experience. A tube coming out of my body that wasn’t there when I woke up and started remembering is one clue. In my defence, I was sedated and intubated for the first two days. Pretty extreme considering I’d not spent a night in hospital since I was born.

I then had an MRI, and various radiating scans on my head and elsewhere to check I was all there. In the coming days I managed to impress the professionals enough for them to let me out in the wild again (but not after tagging me first).

And here I am. Alive. Surprised that I died, and came back to life. Thankful for another chance, whatever that means.

After giving some immunity to a man who either lied to me, or to Elections Canada’s investigators, Canada’s election agency has no new charges to announce against the perpetrators of 2011’s Guelph or national election fraud robocalls.

Andrew Prescott’s information fingers the already charged Michael Sona, and the exiled Ken Morgan who is living in Kuwait. Prosecutors will have to decide if he is telling them the truth, or if he was telling me the truth when he told me in an email conversation he’d asked me to share on my blog last year:

Feel free to think whatever you may… however, know that pretty much every point you touched on in your e-mail is wildly incorrect. Specifically, your assumption that I know anything about whatever happened on a local OR national scale.

You are wrong. Period.

That’s an odd person to give immunity to.

.@ChristianConsrv You told the whole country for 2 years you knew absolutely NOTHING about #robocon. Don't you think people are sad w you?!

Elections Canada has clarified position on robocalls investigation report: EC won't say when or if it will report http://t.co/GT5YUdnIJz

The CSEC commish, entrusted to the task of ensuring CSEC doesn’t break the law during its spying on, err, for this country, is not coming out smelling like a rose.

It was a puppet head trifecta today – the new CSEC *watchdog* defending NSA puppet CSEC to the PMO puppet Senate.

This is my 1500th post on wordpress.com on this blog! My stand-alone WordPress blog posts I’ve still not restored, containing archives circa 2006-2009 are not all included in that number.

Take 15 minutes, and listen to the last 5 years of Canadian politics be summed up off the top of my head.

What’s the PM’s next lie? Pretend he was on Crack, or in a Drunken Stupor when he gave Nigel Wright the go ahead to bribe Duffy?

Is it not obstruction of justice to knowingly give false answers to police? Asking for a senator.

RCMP: "After reviewing hundreds [&] hundreds of e-mail exchanges…" But PMO said they had "no documents" http://t.co/gv9blE7xnW #cdnpoli