Liberals might be happy to learn that OPC leader Doug Ford has been privately prosecuted with breaking federal quarantine law. Trial is pending.

They may be less excited to learn that Justin Trudeau should face similar prosecution for breaking the same law in the same manner. Another who should be charged gave this excuse for their breaking of the public safety measure: “He also noted that the press conference was not a public setting.” Imagine that a ‘private’ press conference.

One of the law profs behind the prosecution of Ford has made waved on Twitter previously.

I think it would be easy to find other Premiers like Moe who’ve broken the quarantine law too. Wasn’t Moe just gallivanting around Europe and the Middle East?

It took almost 2 days following the attack on the US Capital by GOP terrorists, but Twitter banned the ring leader Trump from their platform, after first only giving a 12 hour suspension.

Pelosi doesn’t have the gumption.

She’s been bluster only, for years.

Was there ever a question that Chicago PD was not good?

Smollett, the actor, has had charges dropped. This is following when he was attacked by 2 men. Later the Twitterverse claimed that he’d paid the men to attack him for being gay, to raise his profile as an actor. The Chicago police eventually released the 2 men without charges, and instead charged Smollett with filing a false report with them. Now they’ve released Smollett, dropping the charges. What in the hell happened actually?

Here’s another case where police screwed up due to bias, and 2 people died as a result:

I haven't followed this murder case closely, but I was watching this video in relation to the Smollett charges being dropped, and it came up near the end.https://t.co/enPrMXNN6f
CC @andraydomise

WARNING: The following blog post contains government propaganda (literally). Reading it may cause a warped sense of reality, and loss of your bearings.

It’s repulsive that @YourAlberta Government is paying for this propaganda promoted tweet https://twitter.com/KeepCanWorking/status/996165558822465545 … They sound like a Trudeau Liberal, ‘The money from destroying the earth from selling oil and gas will pay for renewable energy transitions on the dead Earth…’

The Liberals have one thing to say about Kinder Morgan. And they say it over and over again.

Elizabeth May explains why it's simply not true.

"If Kinder Morgan pulls out, there are PLENTY OF OTHER INVESTORS ready to take this project forward!" – Bill Morneau https://t.co/JcFvMspgni

Some days (most days) Twitter really sucks at limiting abuse, and supporting victims of the same.

TWITTER HAS SUSPENDED ME. THERE ARE POWERFUL FORCES AT WORK. BE MY VOICE. #ROSEARMY #whywomendontreport

Women fight on. And to the men out there, stand up. We need you as allies. #bebrave

I need all you beautiful people with a ☑️ to please help me AMPLIFY #dissolvetheboard https://t.co/a4JaOFeZfe

So being a Nazi and threatening nuclear war is fine on Twitter, but calling out sexual harassment is against the rules. Gotcha. https://t.co/raa9uWY9NK

Rose McGowan's Twitter account has been suspended for inciting women to speak out against sexual harassment & rape. Anyway, lets hop on over to Richard Spencer's account & get the deets on the next Klan rally…

And closer to home, a long time blogging and Twitter friend has been in the news, but I missed it. She was sexually assaulted by another well known figure in the Saskatchewan Twitter & political sphere. She was then questioned inappropriately by Saskatoon Police about the assault.

Nothing like some good old fashioned victim blaming from @SaskatoonPolice in the morning. Love it.

Statement from @nicolesarauer re: allegations against a former NDP candidate. #skpoli pic.twitter.com/2WmDa9LS07

1/1 Earlier I retweeted a post re carb tax w/ a profane hashtag ref the PM that I simply didn't initially see. Minutes later it was deleted.

2/2 I should have been more careful and apologize. No doubt the debate on the carbon tax will be lively but it need not involve insults

What’s the account “libslikdik” doing in the Premier’s Twitter timeline anyway? He took the time to unfollow me last year, but he wants to read homophobes and retweet their anti-carbontax nonsense?

2/2 We did not realize that calling the Premier a "fucking fuck face" could be construed as offensive.

As you probably know, “Fair and Balanced” is the Fox News tagline that exists to trick the more easily fooled into thinking that’s what their actual objective is.

Check out today’s story from the Vancouver Observer about “@FairQuestions”, a Conservative friendly researcher who took thousands of dollars in speaking fees from oil companies and testified for Conservative ends in Parliament. This, after being connected to lucrative oil money roles through Senator Duffy.

The $10,000 fees were paid by the Association for Mineral Exploration of BC (AMEBC), Canadian Energy Pipelines Association (CEPA) and Taseko Mines between March 22nd and June 6, 2012. The Inuvik Petroleum Show paid $6000 for a June 21 appearance, along with Amanda Lang and Ezra Levant.

The B.C. mining group also appeared to go out of its way to pay her.

“We usually don’t have fees,” said John Buchanan, Director of Communications and Public Affairs of AMEBC. “It’s a professional opportunity. It’s a way for speakers to give back to their industry.”

4. Senators shdn't be arranging income for a parliamentary witness. Does this need to be said? #cdnpoli

ADDED: One of the most disturbing points in the video is when Krause says she thinks the debate has been skewed because big money from the cities is drowning out small voices in rural Canada, and that funding should be “out in the open”.
—

No. They are victims of circumstance, and despite their wealth and fame, they alone cannot change ‘the system’.

A voice from the Facebook-sphere intones: “I appreciate your commitment and respect what you are trying to achieve but bashing fossil fuels while you continue to use them adds no value to your cause.”

Not true. As Shane’s made plain, there’s no means for someone to hop off the oil bandwagon, because we’ve built our society around it for generations. It will take generations to leave it behind (completely), but that isn’t an argument to stop trying. Quite the opposite, it’s time to get started in a more serious way than the last generation.

I’m sick to death of the people mindlessly attacking people like Gore, Young, and Suzuki for “using oil” while speaking against it. Obviously they have to use mass transportation and mass communication presently available to reach people. To command that they stop today, or be hypocrites, is a very thinly veiled attempt to outright silence them. 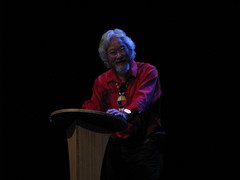 There’s a particularly nasty and brainless bunch on Twitter who earlier this year said I should shut up because I owe my life to oil. Bow down, and tremble like them before thy oily god. They owe their lives to a stable climate and clean water, so why then do they work against the availability of those supposed ‘commodities’ while using what’s left of them? These same twerps are the sorts who claim that “CO(2) isn’t a pollutant because plants eat it“, except they’d never agree to be trapped in a contained environment with “too much” of it, or contemplate its greenhouse effect.

Here are solutions to the problems we all face:

Last Thursday I attended the first CBC Tweetup, which is a gathering of people who’ve connected via Twitter.

Check out our #CBCTweetup #Storify! Thanks to all who joined us for a spectacular evening! http://t.co/SB1Fnhiriz pic.twitter.com/1oX7DtaXrU