July 5th, 2016, after years of a mud pit following the rip-out of the previous playground: 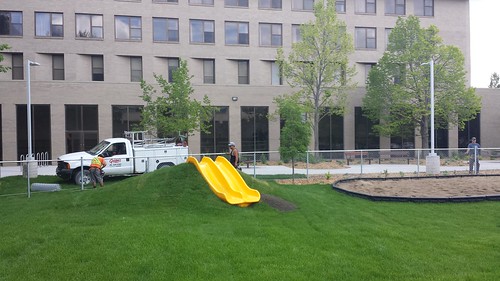 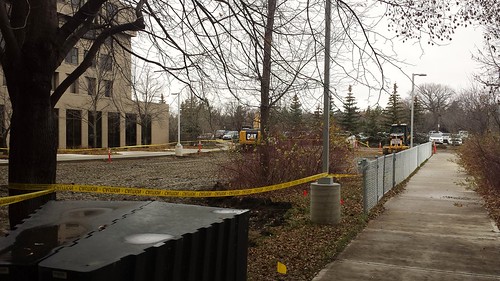 A project of this scale requires a large site and staging area directly adjacent to the building. The site, the courtyard immediately west of the building and south of Wascana Daycare, is a centrally located site that allows for a full and safe construction staging area which will house cranes and heavy equipment.

This area creates efficiencies for the contractor, minimizes the impact on surrounding community and safeguards all who need to access the building and surrounding area. Using this site saves us money on the overall project, even if you include the cost of removing and reinstalling the playground.

When the playground was initially constructed, approval for the College West construction program was not yet granted.

“As Dena mentioned, there was no approval for the $38M+ project prior to building the playground. But surely it must have been on the radar – $38M+ projects don’t materialize over the course of a few months, do they?  Or perhaps they do, because in fact, the BoG approved the renovations of College West on July 5th (the same day the fences [were] installed, it seems; …

Perhaps being prudent in building the playground would have been wise.”

A parent with an impacted child thinks so too:

“when I dropped my son off on Monday, he was DEVASTATED to see a bulldozer tearing up the his new playground. While it is posed to be rebuilt, it will not be until 2018.”

This is another frustrating example of construction on the University of Regina campus. Over the years I’ve proposed and supported many projects. Some are now realities, like the park and ride at Conexus Arts Centre (used by the Health Region instead), The RPIRG Green Patch garden, and the U-Pass universal bus pass for students which drastically cut the cost of a bus pass for students and increased bus service on campus. But also many more ideas have been rejected or have yet to be built. There’s no wind-row composting system on vacant University land. There’s still no energy dashboard, but there’s one apparently in the works and behind schedule. And there’s no separated bicycle infrastructure on streets. There’s no single-stream recycling system. No composting system. Not a single on-grid solar panel array. The thousands of dollars that went into constructing a playground and fence in use for less than 4 months, could have gone a long long way into implementing any of those other ideas and wouldn’t have been bulldozed in under a year.

I usually keep these sort of writings internal and send them directly to President Timmons, since she does respond and listen to what I have to say. This example though is already done, and was already done wrong. The money is gone, wasted. What do I hope for? Better foresight in project planning, and more willingness to try ideas proposed by staff and students. I can’t help but feel that a playground was destroyed literally in front of children who loved it, because a nearby parking lot is too precious to people who need to get over their love affair with their cars.