At lunch, a bunch of ducks got stuck in a courtyard and needed to be shepherded to the lake. 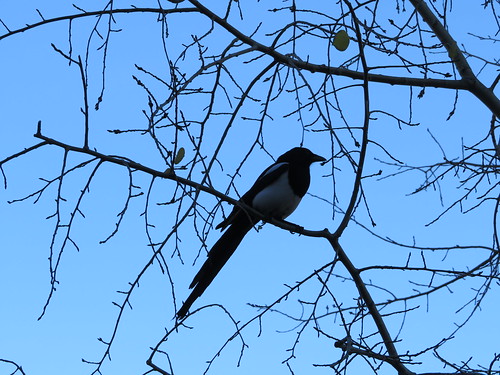 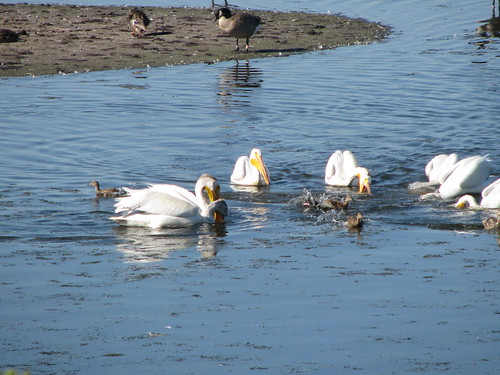 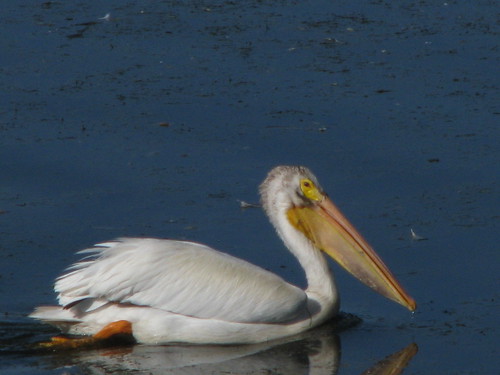 I never noticed Pelicans on Wascana Lake before about 3 years ago. Before that, they were common on the South Saskatchewan River through Saskatoon. 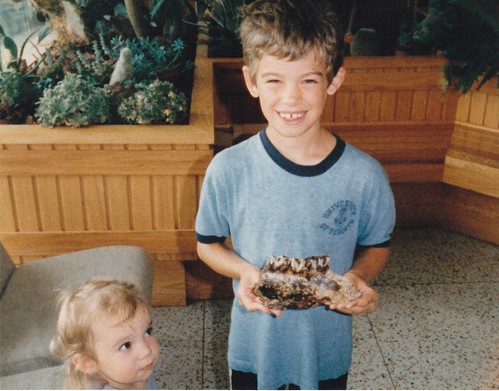 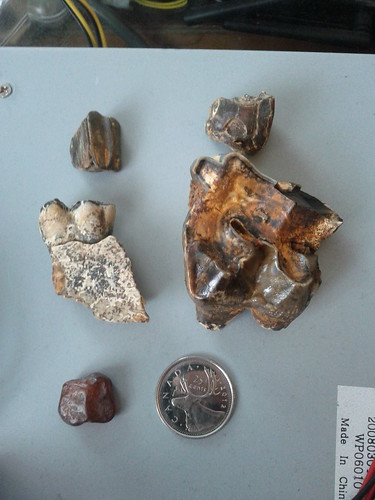 Dr. Shiva gave an interesting talk about how system we’ve built are being used to manipulate individuals in societies all around the world into valuing money over life.

I'm not sure I can bear hearing that the Scottish invented both #curling AND #sex. http://t.co/n7AdaO9EcI #Scotland

Microbrachius dicki was the fish that realized it could use sex to reproduce. Feeling unsatisfied, fish eventually returned to spawning instead. 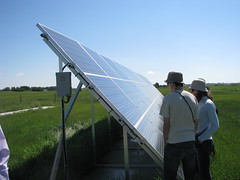 Solar farm and home system of 10kW
Inverter anti-islanding. Prevents electrifying the grid while grid is down.
Isolation ring for the meter can be installed so you can attach a generator to the house to let the inverter keep working during a grid failure.

A Canadian report of a 2008 study of cities over 200,000 people around the world, listed Regina as sixth best in the world for solar energy generation potential.

Kelln has a system for pumping cattle water, that motion detects cattle, pumps up water to a bowl, and then lowers it below the frost line after the cattle have left.

Solar panels have passed the $1/Watt holy grail.
$500/Watt at the beginning. 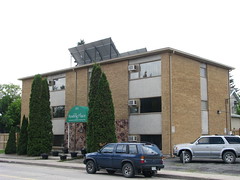 Namerind put a system on a rest home. The Resting Place south of The Serbian Club.
Namerind has a power generation update on their website.
Check out 1100 block Winnipeg in a few weeks.

Battery Depot which we drove by, has no apparent interest in marketing their products to solar users. Why aren’t they making money by putting solar panels on their south facing roof?

Picked up a few more people at Candy Cane park, then at Mac the Moose in Moose Jaw. 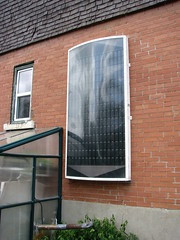 2.7kW grid tied system next on the south west corner of Moose Jaw. There are two arrays mounted on the ground, and their angles can be changed.

Next was a hybrid system to heat a stable. GAIT equestrian centre.
$1500 for the excavation of a geothermal cooling/heating system seen in photo.

Saw a real moose behind Mac the Moose.

There are not a lot of rattlesnakes around the park, especially the East Block of the park where Wood Mountain is. Nick, who is with Brenda showing off the snake skin, almost stepped on one by accident last week and it didn’t even try to bite him.

Watch these videos, as the numbers get bigger at the end of the titles.

Deer at a gravel pit. Fossils in this pit go back to at least 13 Million years ago, and contain horse, rhino, and other animals from ancient Saskatchewan well before ice ages scraped much of the province flat like it is around Regina.

The Prairie Dog Blog linked to an excellent article in The Stranger last year. It lays out humanity’s future, based on the status quo.

[W]hether you can pin it precisely on global warming or not, the ocean of wilting grain that fills the middle of our country after this hottest of summers is just a dress rehearsal. Sure, this summer was a freak of probability, more to do with the randomness of weather than the slow processes that are heating up the only world we can inhabit, but still, it was a chance to see how we might adapt to what will slowly become the norm as the planet heats. And how did we do? We failed. For now, we’ll pay more for food and eat our stored grain. In not too many more decades, we’ll starve.

This was the vision in my head as I rode my bike home. What are now the richest farmlands will become endless dust bowls. Increasingly desperate, hungry, and thirsty, we tear ourselves apart. Humanity dies. Much of the complex life that makes our world interesting and beautiful dies. It’s a hideous, vapid, lonely, and entirely predictable existence.

There’s a problem preventing us from fixing the problem of Climate Change: “the dimwitted, frightened, angry, corrupt and complicit villainy of the sort of fools and tools who insist there’s nothing wrong when evidence clearly contradicts that.”

The “fools and tools” didn’t all arrive at the wrong conclusions by the same means. Some, most I would argue, were boiled like frogs. They were slowly fed misinformation over decades, leading them to confirm one lie with another convenient one to arrive in the nick of time, just as the earlier lie became unbelievable. Yet they are in large part the hindrance humanity faces to get to work with the business of saving the world from humanity. People are the problem, and are also part of the solution. If we are not part of the solution, well, that’s a bleak future for billions of us, but I’d rather we collectively learn to live within the means of the Earth to provide for us than to wait for mass extinctions to knock us down to size.

Sask birds in trouble? (in which I ask a sincere but seemingly stupid question) http://t.co/pRWYsexde3 with @trevorherriot

Should we attempt to save 1/8th of all bird species that are likely to die off in our lifetimes if we do not change our collective actions? Of course! Can we manage to? Not if we let naysayers and the plain ignorant guide our political systems.

It's mind boggling there are people who feel the need to defend a situation caused by humans, that jeopardizes our survival & 1/8th of birds

The world’s deep freeze in the north is thawing out quickly. As a result we’re making interesting discoveries as bodies get uncovered. There are two big problems. We’re losing thousands of years of preservation in short years, giving scientists only in our time period (and before) access to direct collection of this unique and precious data. Two, it’s an indicator of climate change being well under way.

As I explained to a friend the other day, if you’re not at least a little worried about climate change, you betray ignorance of the subject. I contend there’s no way an educated, and rational person could not be worried about the impending deadly situation which has few solutions, and most of those are not attainable by individual (only global) action.

We’re triggering a massive die-off, the extinction of countless plants and animals when we change their climate around them. The mutants which are adapted to the changed situation will survive as those species lucky enough to have adapted mutants always have throughout evolution. Humans have the luxury of adapting quickly in a lifetime to many environments, but most plants and animals do not. It’s going to be a difficult future to survive in, or rather it will be for most of the lifeforms on Earth at this time.

GE scientists in as early as 1956 realized global warming (climate change) was being caused by pollution.