The Onion hasn’t lived up to its journalistic standards of fake news, so I’m writing a piece for The Garlic, and interviewing Carbon Dioxide to get its thoughts on surpassing the dangerous 400 parts per million mark.

John Klein (JK): So, Carbon Dioxide, do you mind if I call you Carbon for short?

Carbon Dioxide (CO2): Sure John, no problem. I’ll even let you abbreviate my name to CO2 without making the two subscript.

JK: Very kind of you, Carbon.

CO2: No problem, it’s my pleasure to help out. It’s the least I can do, for helping to destroy your climate.

JK: It’s really humanity’s fault though for burning so much fossil fuel. You can’t take responsibility for that, you’re just a molecule created through oxidation of carbon.
Let’s get to the questions. How do you feel about surpassing 400 ppm in the atmosphere for the first time during human civilization?

CO2: I feel pretty negative about the whole situation, right down to my electrons. I was quite content at levels under 300 ppm, and it seems like only a few years ago that I was at 350 ppm.

CO2: Anyway, I feel really burned out by all of this talk about sequestering me. I’d rather spend time at the ocean.

JK: You mean you by becoming carbonic acid in the Earth’s oceans, and harming shell fish and other aquatic life?

CO2: There’s no malice intended, I’m just a molecule, as you’ve already pointed out. If you had a choice between taking a soak in the ocean, or being put into a high pressure situation under the Canadian plains, what would you choose?

JK: I see your point.

CO2: It’s not easy being humankind’s most despised molecule, with some many millions out to reduce my levels. I can count on some support from misguided, or well paid carbon fluffers, but it’s not easy being anti-green. At least plants (and potted plants in Congress) love me.
See:

Another twisted and scientifically bad #climate piece in the #WSJ. Deceptive from the first paragraph to the last. http://t.co/4kHUBmVWhL.

JK: The plants that don’t end up underwater from flooding, or burned from drought, love you?

JK: My city has been trying to cut back on creating Carbon Dioxide since the early 1990s. Here’s a sign from 1999’s Cool Down The City Challenge: 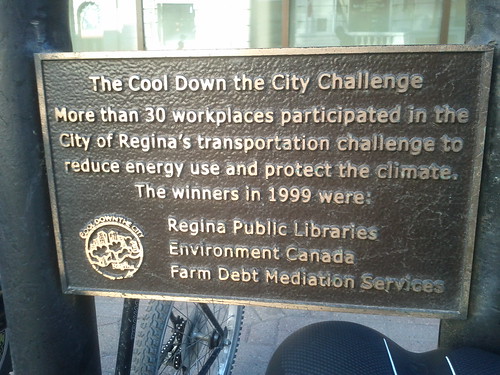 They installed one bike rack for ten bikes. There are over 220,000 people in Regina. It would appear people don’t take Carbon Dioxide very seriously.

CO2: My influence on human civilization and daily life is vastly underestimated by most people.

JK: Indeed. It was a pleasure speaking to you, I should let you get back to warming our atmosphere too much.

CO2: Thanks for asking me to talk, John. I think I’m going to chill for a bit (as a liquid, naturally).

JK: Poor Carbon gets such a bum rap. There are so many good politicians on its case.

One response to “The Garlic: Interview With Carbon Dioxide”